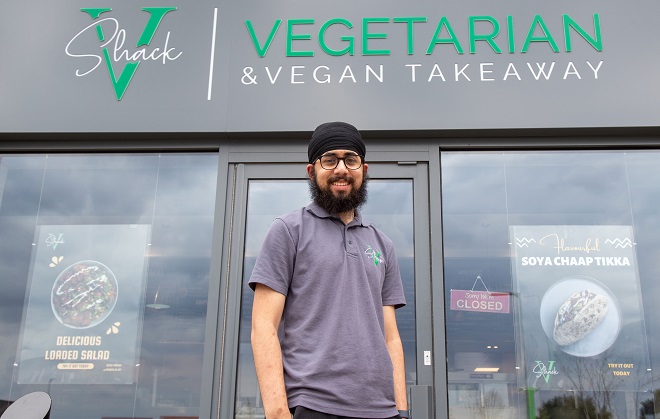 The former Derby College A-level student has always wanted his own business and is thrilled at the positive attention his venture has already received.

Studying A Levels in Business, Law and Psychology at the Joseph Wright Centre has been a key ingredient in this success according to Charanjot.

He said: “Having A-Level Business helped me with the practical aspects, while Applied Law has been useful on the regulatory and compliance side. My Psychology knowledge is so useful with regards to marketing. It’s helped me look at how people buy – how the brain works when looking at a menu layout, for instance, I can figure out what customers look for initially.”

As well as studying such directly relevant subjects, guidance from his A-level teachers has also been invaluable.

Charanjot added: “My teachers at JWC were so supportive of my business idea. Jaz, my teacher in the second year, inspired me considerably. I went to her with my business initiatives and ideas and we talked about how they could be progressed.”

Charanjot, who is assisted full-time at V Shack by his mum, and at busy times by his dad and sister, loves being considered an inspiration to others.

He said: “I’ve always been the sort of person who looks up to others and had role models – inspirational people who’ve done well. Hopefully my story will inspire a new generation of  DCG students and help them to achieve their dreams.”

Charanjot plans to keep growing the business, opening new branches in Derby then in other cities as a long time goal. He added: “There’s a huge trend towards becoming vegan. It’s good for the planet; we can’t reverse all the damage and pollution but going vegan is one positive step forward we can take.”

My teachers at JWC were so supportive of my business idea. Jaz, my teacher in the second year, inspired me considerably.