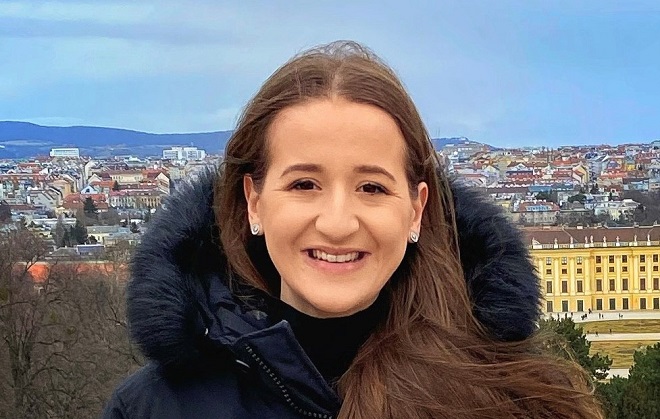 Lydia, who took A-levels in Spanish, Law and Government & Politics, is now an English Language assistant for the British Council in Wiener Neustadt, a small Austrian city south of Vienna, and is loving her job.

She said: “I love teaching but it was never in my plan to study languages at university. Before I started studying Spanish A-level with our lecturers Sally and Clare at the Joseph Wright Centre, I was convinced I was going to train as a lawyer.

I’d always intended do a law degree but swapped it for a combined degree in Spanish and German, picking up German as a beginner.”

With her lecturers’ encouragement, Lydia also took an EPQ (extended project qualification) at college, improving her chances of getting a place at the University of Sheffield, her first choice.

Her current role involves assisting the English teachers and encouraging the students, who are aged 16 to 19 to speak English.

Lydia said: “It’s good experience for the students to practise with a native English speaker and I also talk to them about UK culture, my Derby upbringing and what it’s like to live in England.”

Looking back on her decision to change career direction, she added: “JWC was my best local option for A-levels and it made me realise my own personal connection to learning languages and how important it was for me to study them at university.

“I had what I thought was a five/ten-year life plan – I’d never imagined I’d be speaking in German and living in a different country!

“It’s said that English is spoken everywhere but that’s not the case. When you’re among the minority of people who speak a foreign language, it helps you to stand out. Having languages can open so many doors.”

JWC was my best local option for A-levels and it made me realise my own personal connection to learning languages and how important it was for me to study them at university.