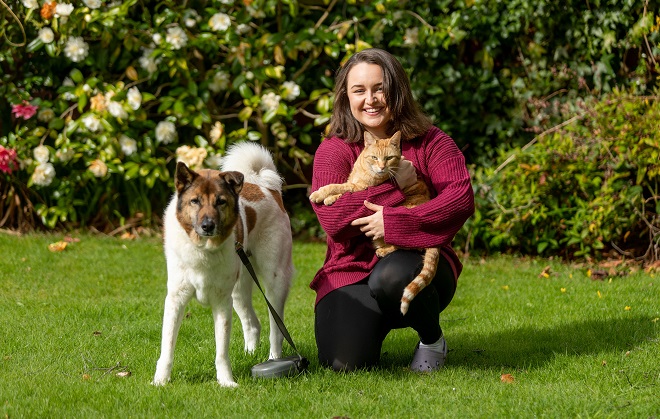 Kate, 22, who completed, with distinctions, the Level 3 Extended Diploma in Animal Management (science pathway) at Broomfield Hall, is now in the second year of a six-year Gateway to Veterinary Medicine degree at Nottingham University.

Although she has always liked being around animals – she’s ridden horses since the age of six –  Kate hadn’t considered a veterinary career while still at school.

But, after noticing the positive impact helping out at a riding school had on her mental health, she decided to look into Animal Care courses at local FE colleges.

She said: “There were Animal Sciences courses nearer to where I lived but I preferred the sound of the Derby College ones. I wasn’t sure what to expect so I went along to an Open Day at Broomfield Hall.

“Unlike other colleges, there are animals on site – and such a wide range of them too. Broomfield Hall even has exotic animals. I was interested in learning about them.”

Kate, who had initially started sixth form after GCSEs, appreciated the chance to self-study as well as the opportunity to handle animals as part of her course.

She added: “College was more similar to university than to school and it helped me become a more independent learner. Practical work is so important and I’ve found that doing a BTEC rather than A-levels has given me an advantage as I’ve already had so much hands-on experience at college.

“Also, in terms of course content, the level 3 science pathway I took is very similar to what’s taught at A-level. It’s helped that some of what we’re learning at university was covered on my course at Broomfield Hall.”

When she qualifies Kate wants to work in a mixed veterinary practice looking after small and large animals. Going on safari in South Africa with College also sparked a keen interest in wildlife and conservation so she would also like to work part-time with wild animals.

Unlike other colleges, there are animals on site – and such a wide range of them too. Broomfield Hall even has exotic animals. I was interested in learning about them.