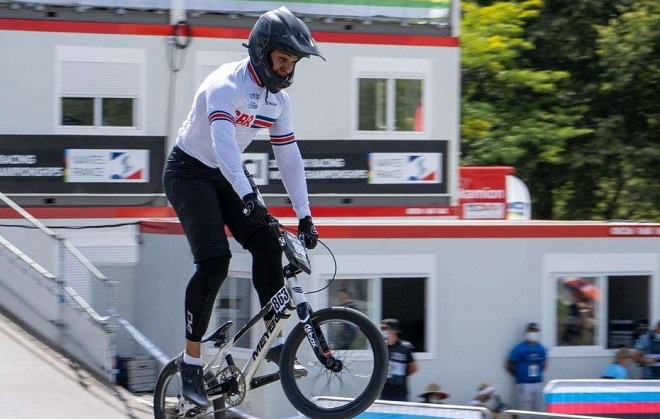 Eighteen-year-old Jay, who took levels 1, 2 and 3 in Electrical Installation at the Roundhouse, has been picked to compete for a place in the 2024 GB Olympic team.

He said: “Throughout my time at Derby College, I was training to be a world class competitive BMX rider.

“It’s a sport I took up when I was little and in 2019, I won the junior men’s race at the British Championships.

“College was supportive of my BMXing. Just before I took my test for level 3, I had a bad crash while racing in Birmingham. I shattered my wrist and broke my shoulder.

“I had to give my test answers to my tutor, Chris, so he could write them down for me.”

Jay loved the practical side of his course but also liked learning the business aspects of  having a trade, such as keeping accounts records.

He added: “I took the electrical course at DCG because at some stage I’d like to be a property developer and electrical installations are the biggest cost you’ll face when doing up a house.

“Quite a lot of people in the electrical trade will one day go on to work for themselves so learning the business side at college alongside your trade is really useful.”

Jay is now a few months into a gas apprenticeship with Fairburn Heating Systems in Worcester, a role he is balancing with rigorous training commitments.

He added: “I’m now competing on the BMX National Series circuit and took part in the World Championships in Nantes. And, just recently, I found out I’d been accepted on to the BMX junior rider programme to train for a place in the GB Olympic squad.

“It’s exciting but full-on. I train at home in Derby but at weekends I also go up to Manchester to train at the national velodrome. Fortunately, my employer, like college, is very understanding.

“My manager races superbikes, so he knows about the pressures involved in competitive sport. There are no guarantees, but I would love to make it into the GB Olympic team for Paris 2024.”

Jay is also one of Aldi’s Rising Stars, a programme that supports 20 young athletes by providing financial help with training and competition costs.

His next big event is BMX European Cup in Verona in March.

College was supportive of my BMXing.