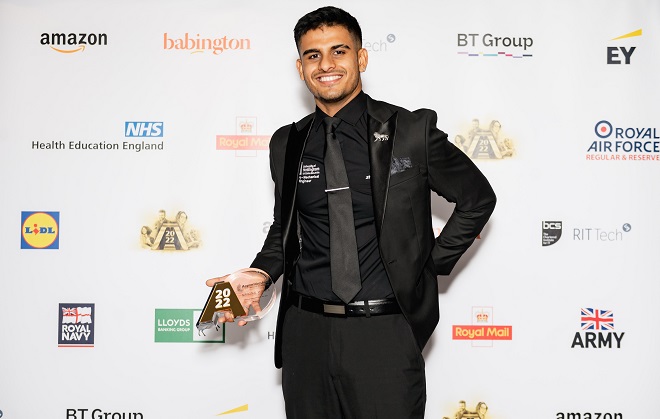 Ali was named Advanced Apprentice of the Year in the 2022 Apprenticeship National Awards which are backed by the UK Government.

Ali, now 20, works for medical packaging equipment company Shawpak in Derby and recently began an electro-mechanical engineer degree apprenticeship. He is studying part-time at Nottingham University, with the support of his employer.

Ali said: “What I achieved at college and at work gave me the tools to get to the regional finals and ultimately win this nationally recognised award. I didn’t expect to get this far against so many applicants but am grateful for all the input I’ve had from Derby College during my level 3 apprenticeship.”

As part of Ali’s three-year level 3 engineering apprenticeship, he studied at Derby College’s Roundhouse on day release. He started as an electrical engineer moving to mechanical engineering in the second year.

In the third year Ali focused on test and technical engineering in preparation for the design and programming side before he progressed to the degree apprenticeship. His aim now is to continue working with Shawpak on the company’s innovative medical equipment projects.

Additionally, he is involved in mentoring apprentices in his workplace and has been back to his old school, Landau Forte, to talk to students them about opportunities in the technology sector.

Ali has also joined the East Midlands Apprenticeship Ambassador Network (EMAAN), so he can continue promoting apprenticeships to other young people.

What I achieved at college and at work gave me the tools to get to the regional finals and ultimately win this nationally recognised award.