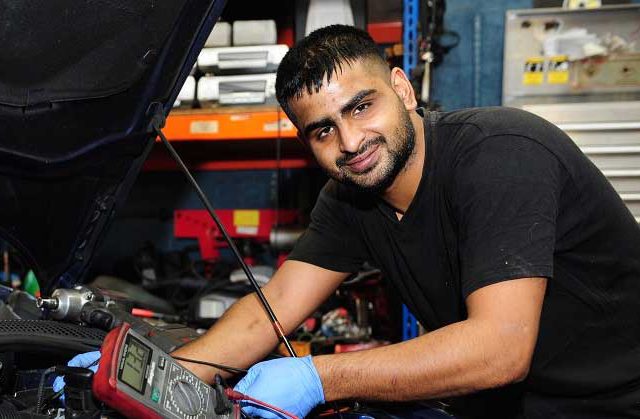 When vehicle technician Zubair Hussain enrolled on Derby College’s motor vehicle course he had no GCSEs just a love of cars and a willingness to learn.

He had missed out on sitting his GCSEs at school but was keen to gain qualifications and train for a job that really interested him.

And after achieving levels 1, 2 and 3 over successive years along with maths and English qualifications, Zubair secured a place at the University of Derby.

He initially took a foundation degree in Motorsport Engineering before topping it up and graduating 14 months ago with a 2:2 BEng honours degree.

Zubair now works as a vehicle technician at Sam Autos, an independent garage in Normanton, Derby.

Now he is qualified, Zubair wants to gain as much experience as he can to take him to the next the stage in his career.

Zubair would ultimately like his own garage one day and is grateful to Derby College for putting him on the road to a fulfilling and skilled job with great financial prospects.

Zubair enjoys mentoring trainee vehicle technicians and advises students on Derby College’s motor vehicle course to “work hard and make the most of a great opportunity.”

I couldn't believe it. I'd always thought that uni was for clever people and I'd never thought of myself as clever. It was my Derby College lecturer Matt Curtis who encouraged me to go and do a degree. Our lecturers were great – just the best. They really wanted us to succeed.