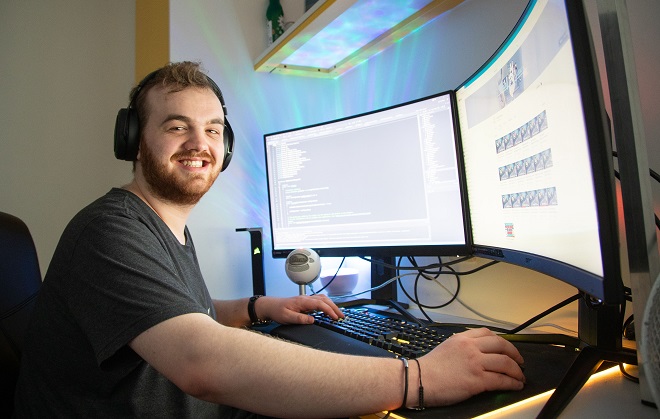 Game programming undergraduate William Hardy is looking forward to finishing his degree at Staffordshire University so he can go and work abroad.

Now in his second year, William, who took the level 3 games development course at Derby College, wants to move to Saudi Arabia and is keen for ‘doors to open up.’

He said: “I’ve always been interested in gaming and after leaving school, I came to Derby College to take my level 2 in computing at Joseph Wright Centre.

“Computing was ok but what I really enjoyed was my two-year full-time level 3 games development course, also at JWC. That was fun.

“The lecturers were really nice, the course was just what I was looking for and I learned such lot.

“I also made quite a few friends on my course – so much so that they now make up the  entire household of our student house in Stoke!

“There are six of us from Derby College, including Jordan Thorpe and Lauren Taylor, who are both in their second year of a degree in Games Art at Staffordshire University .”

When he’s not studying, William is involved in running a games studio with Jordan and Lauren.

About four months ago he and Jordan also launched an educational YouTube channel to help aspiring game developers.

He added: “There’s a gap in people’s game development knowledge and we want to help. We’re also working on a little business idea together but need to see if it’s feasible and doable.

I wouldn’t say I’m a creative person but I like to take an idea, run with it and see it come to life.”

As part of his degree course William is learning how to create computer games as well as studying game artificial intelligence and physics, computer graphics, and network programming for multiplayer game development.

He is also learning  programming languages as well as the software engineering skills needed to develop large, efficient programs.

The lecturers were really nice, the course was just what I was looking for and I learned such lot.