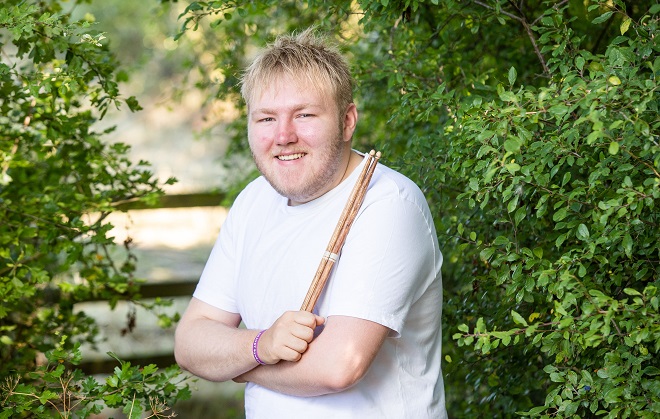 So far this year he’s played the legendary Isle of Wight Festival, Silverstone and Y Not at Pikehall as well as numerous local gigs. Marseille have also recently released their sixth single and will be going on a mini tour next year.

For Tom, who’s now 21, a music career was all he ever wanted.  He said:  “I went to the Joseph Wright Centre to enrol on the Advanced Diploma in Music immediately after I’d collected my GCSE results. I literally went straight to college from school.”

“I’ve played the drums since I was about eight – starting at primary school and playing all through secondary school. Drumming was always a big part of school life.”

Whilst at JWC Tom and other students formed their first band, Boats on the Ocean – a move which was great for confidence building.

Tom said: “We got chance to do gigs at college which really helped my playing and got me more used to being on stage. Also, my course taught me a lot about how the music industry and producers work. I didn’t have much of a clue before.”

Formed during lockdown, Marseille take their influence from 90s Britpop and indie rock bands such as Cast, Oasis and Stone Roses.

Tom loves playing live as well as recording material with producers at music studios in the Peak District.

He said: “It’s cool working with such creative people. I’m the first musician in my family but my dad’s taken up the guitar since I joined Marseille. He’s a big Indie music fan so I get a lot of my music influences from him. I’d say my favourite band is Radiohead.”

We got chance to do gigs at college which really helped my playing and got me more used to being on stage.