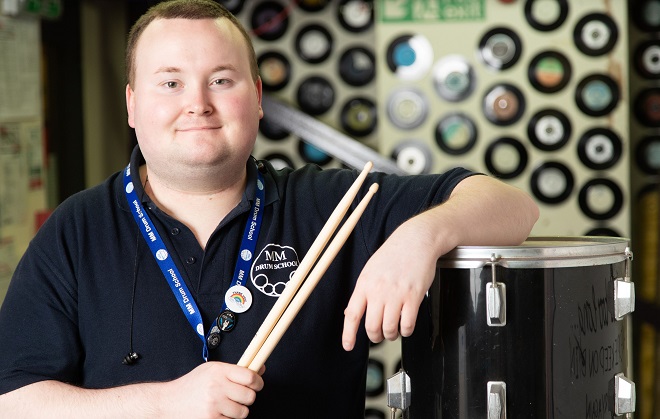 Drummer Michael Moore is so pleased he pursued his dreams by enrolling on Derby College Group’s BTEC level 3 Extended Diploma in Music.

Since completing his course in 2013, he has gone onto found award-winning MM Drum School® in Derby, teaching hundreds of people of all ages and abilities to play the drums.

Michael, who is now 28, learned to drum at the age of nine, staying on after school to practise. But despite his love of drumming, he didn’t go into music when he first left school.

Instead, he completed a business administration apprenticeship and got a job, until one day he decided to ‘take a punt’ on training for a music career – enrolling on the two-year full-time course at DCG’s Joseph Wright Centre.

Michael said: “One of the best parts about going to college, apart from the facilities at JWC, was the student network. It was really good to be with other people who were as into music as I was.

“Some of the people I met on my course have gone on to have successful careers in the music industry. During my time on the course time, I was performing regularly, gigging three times a week on some occasions.”

In 2014, with help from the Prince’s Trust Enterprise Programme, Michael founded MM Drum School®, and just three years later, expanded his business into a new purpose-built facility in the city centre, with dedicated sound proofed rooms.

Michael and his team give one-to-one tuition to students working towards exams, but they also focus on music as therapy.

Additionally, the school provides programmes for people with special educational needs and those on the autism spectrum.

“We’ve won awards and the business is going well. I’m so pleased I took a punt on the DCG music diploma.”

We’ve won awards and the business is going well. I’m so pleased I took a punt on the DCG music diploma.