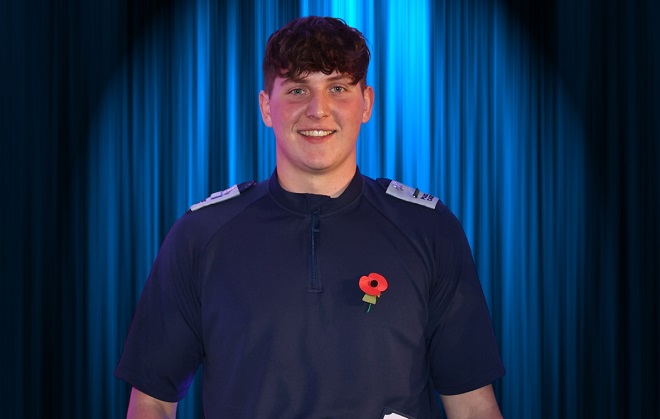 Luke who is 17 has wanted to become a police officer for as long as he can remember and is currently finishing his level 3 course at Broomfield Hall.

In November he was named Derbyshire Police Cadet of the Year as well as receiving the Derbyshire High Sheriff’s Cadet Award at a ceremony at the force’s Ripley HQ.

Luke said: “I’ve always enjoyed anything to do with serving the public. As a young lad I loved watching Traffic Cops programmes on TV; they really influenced me to join the police.

“I went straight to Derby College after school and took the level 2 public service course as well as GCSE maths and English. Broomfield Hall is brilliant. It’s a nice campus, especially for someone sporty like me, and the teachers really engage with you in lessons.

“They show they actually care. We’re covering radio comms for the communications assessment at the moment. It’s great. I always look forward to the practical sessions.”

A cadet for around six years, Luke takes part in police community work, such as assisting with  leaflet drops on crime prevention and information on staying safe during bonfire night. In this role he has also learned about PACE, the Police and Criminal Evidence Act, the law and police powers such as Stop and Search.

When he leaves college in summer 2024, Luke plans to look for an apprenticeship with the police and ultimately become an armed response officer.

And he’s not the only member of his family pursuing a career in the force. His younger sister Ruby is also a police cadet and will be joining DCG’s public services course when she leaves school next year.

Another big achievement for rugby and football fan Luke, is helping to bring back rugby union to Derby College students.

Luke, who is 6ft 7 and a second row forward, added: “Around 16 to 18 players get together for a game of rugby at Broomfield every Wednesday, which is brilliant.”

Broomfield Hall is brilliant. It’s a nice campus, especially for someone sporty like me, and the teachers really engage with you in lessons.