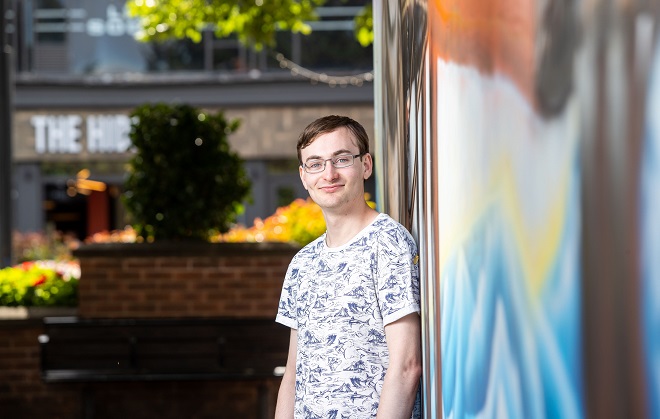 Learning how to be a computer games developer was a natural progression for former DCG student Alex Skam.

Alex, now 21, has loved ‘messing about on computers’ from a  young age. He went straight from Kirk Hallam School to the Joseph Wright Centre to study for a level 2 then a level 3 diploma in Games Development.

Having completed college with distinction, Alex has secured a place at the University of Derby to Computer Modelling and Animation.

Alex, who has also exhibited the games he developed while at college at the QUAD in Derby, thoroughly enjoyed his time at JWC.

He said: “The level 3 course is a good general one which offers a bit of everything, such as programming and 3D modelling. Nobody rushes you – you’re given time to learn and accumulate knowledge.

“One of the best things about college was interacting with everyone and learning from each other.

“Our lecturers were very knowledgeable. They each had their own skill sets and personality quirks and were great to get on with. The student support staff were really helpful too. They point you in the right direction; the communication is good as everyone talks to each other.”

Our lecturers were very knowledgeable. They each had their own skill sets and personality quirks and were great to get on with.