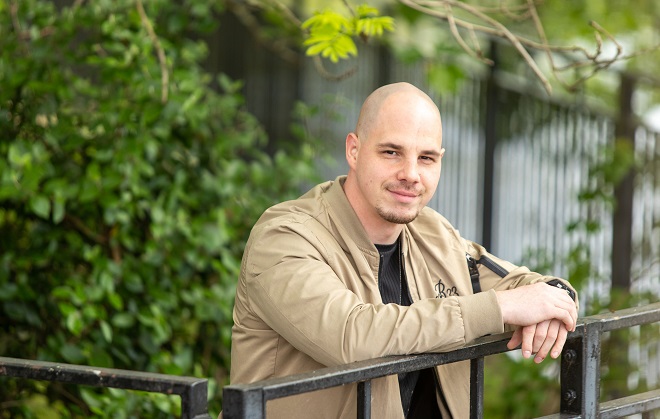 But, before he could fulfil that destiny in the UK, Seb, who came to Derby from Poland in his mid-teens, needed to learn English.

Assigned a Year 11 place at Merrill Academy, his teachers recommended he went to DCG to take an ESOL (English for speakers of other languages) course as, by his own admission, he had ‘no English whatsoever.’

Seb said: “I realised that if I wanted to move on with my life in the UK then I needed good English so I practised hard, and not just in class.

“Every morning, on the bus into college, I’d pick up a copy of Metro, the free newspaper, then highlight several words I didn’t know so I could learn them and strengthen my vocabulary.

“My teachers at Derby College were amazing. They were extremely patient but always helpful and encouraging us to learn more. I wouldn’t be where I am now if it hadn’t been for them.”

Generations of men in Seb’s family have served in the army in Poland and, like them, he wanted a career in uniform.

After completing ESOL and  his GCSEs, he enrolled on the level 2 public services course at Broomfield Hall, progressing to the BTEC level 3 in uniformed public services then ultimately to a top-up degree in offender management at the Roundhouse.

Seb, who would ultimately like to work with the firearms unit, is currently based with the emergency response team at Pear Tree Police Station in Derby, responding to 999 calls. He added: “It sounds a bit of a cliché but I like that every day is different.

“Although we might do the same tasks frequently, such as preparing court files and taking statements, the circumstances in each case are never the same.

“Again, it sounds like a cliché, but what I enjoy best about my job is helping the public. It’s not all about catching criminals.”

My teachers at Derby College were amazing. They were extremely patient but always helpful and encouraging us to learn more. I wouldn’t be where I am now if it hadn’t been for them.